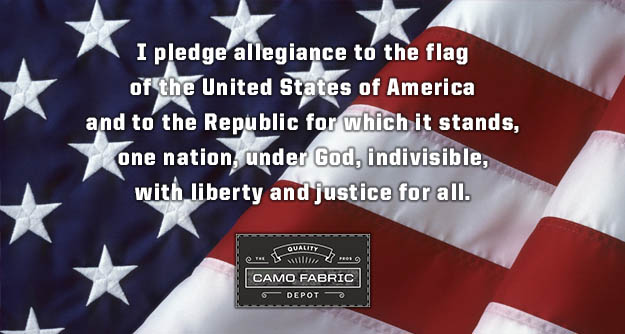 In the spirit of the love for our country and also our obsession with fabric, we thought it would be great to explain why we celebrate the most important piece of fabric flying in our nation. The American Flag.

Our flag or “Stars & Stripes”, was authorized by congress as the United States of America’s national symbol on Saturday June 14th, 1777. The entry in the journal of the Continental Congress 1774-1789 Vol. Vlll 1777 reads “Resolved that the flag of the thirteen United States be Thirteen stripes alternate red and white: that the union be thirteen stars, white in a blue field, representing a new constellation.”

A Waubeka, Wisconsin school teacher named Bernard John Cigrand is one of the people credited with championing the celebration of the American flag. In 1885, he placed a 10-inch 38-star flag in an inkwell and had his students write essays on what the flag meant to them. He called June 14th the flag’s birthday and Stony Hill School is now a historical site. From that day forward Mr. Cigrand dedicated himself to inspire not only his students but also all Americans in the real meaning and majesty of our flag.

In 1916, President Woodrow Wilson issued a proclamation that officially established June 14 as Flag Day. In August 1946, National Flag Day was established by an Act of Congress.

So today, when you see the great American flag flying, be proud of the flag and what it truly represents. Be proud to be American and salute this wonderful piece of fabric.

When: You can display the flag outside from sunrise to sunset. If you want to fly it after dark, it will need to be lit. Don’t fly the flag during inclement weather, unless it’s an all-weather flag.

On the porch: The union of the flag–the blue section with white stars–should be placed at the peak of the staff unless the flag is at half-staff. When the flag is suspended from a rope on a pole extending from a house, the flag should be hoisted out, union first, from the building.

On the wall or the window: When the flag is displayed on a flat surface like a wall, the union should be at the top left.

On the street: The flag should be suspended vertically with the union to the north in an east and west street or to the east in a north and south street. The flag should never touch anything beneath it, so make sure it’s hoisted at the proper height.

On a vehicle: The staff should be fixed firmly on the right side of the vehicle. Do not drape the flag over the hood, top, sides, or back of a vehicle or a boat.

Half-staff: During periods of mourning, it is common to see the flag flying at half-staff. Only presidents can proclaim such periods for a national remembrance. Governors can also declare mourning periods at a local level. In some cases, heads of federal agencies can order the flag flown at half-staff on grounds under their supervision. Traditionally, states and local governments follow the president’s proclamation during a period of national mourning.

Learn more about the flag, its history, protocol, and ways to pay your respects, including the proper way to fold it.

Camo Fabric Depot now offers Flat Rate Shipping at $15 per order as well as FREE Shipping on orders over $100 within the 48 Contiguous United States. Dismiss

PLEASE NOTE: Unfortunately, we cannot return custom cut fabric due to choosing the wrong fabric for the job. If you have questions we will be happy to help.